Have you ever felt shame?

The burning, red hot sensation that there is something really wrong with you? That if the world knew the truth about you, it would demand your execution? Ostracism? Exile? Or worse?

I was raised in shame, grew up in shame, and lived most of my adulthood thus far in shame, convinced that there was something radically, fundamentally, unforgivably wrong with me. And that my continued survival depended on my ability successfully to hide that truth from others – my wife, my family, my colleagues, my friends.

Ironically(?), as my “recovery” has progressed, as I’ve become more and more comfortable in my skin, confident in my ability not to resort to compulsive sex as a way of medicating emotions, I’ve found myself not just un-ashamed, but downright proud. I mean, not proud of the CPOS I was, or of the miserable, cheating, lying, stealing existence I led for years. And not proud of how long it took me to come to terms with the fact that I was powerless over sex, that my life had become unmanageable. But proud of all that’s happened since then. 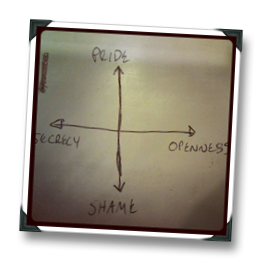 This isn’t always easy – either for me or for T. Because if you put shame and pride on a vertical axis, and secrecy and openness on a horizontal, pride generally corresponds with openness, secrecy with shame.

And as I’ve occasionally written about before, I have no model for a healthy relationship to the difference between secrets (which I think are generally bad) and privacy (which I think is generally good).

But I’m working it out, slowly.