I’ve often written about my anger that I understand it, almost always, as a sort of second-order feeling, one I produce to avoid some other, less welcome, more vulnerable feeling.

There’s been a lot written about “primary (or basic) emotions,” analogizing certain emotions to primary colors, as if all emotions could be constituted from a palette of the primary ones. This metaphor rings true for me, even if I’ve never read a list of primary emotions that resonates with my experience. Here’s a list of lists – none of which seems right to me, and here’s an article that comes closer to my sense that, at least for me, all emotions are built out of a combination of happiness, fear, sadness, and disgust. The article suggests that fear and surprise constitute one single emotion, and that anger and disgust constitute another. But, for me, surprise isn’t something I experience as an emotion, and anger, as I’ve said, almost always can be reduced further, like a fraction. 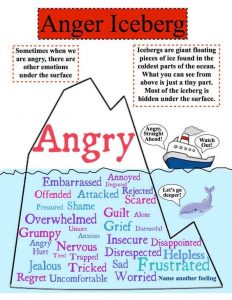 When I’m most at peace, my anger, when it arises, dissipates quickly into its constitutive elements.

I can see some of those primary emotions: I’m sad about growing older, both grieving the pasts I didn’t live and the disappointments of my present and, inevitably, my future. And I have fear: fear of mortality, of course, but also, of something more ineffable, more obscure. I fear failing, in ways I don’t quite understand.

I don’t fear failing professionally, economically, intellectually. I don’t feel conscious guilt over the manifold ethical, moral, relational failures of my past: I forgive myself quite liberally all of those.

No, I fear something more abstract. I fear failing others – and I’m sad about those failures for which I just told you I forgive myself, and fearful of the very long-term ramifications of those failures.

This is the worst combination: it’s as if, long ago, I set in motion an awful chain of events, one that was, at the time, the best, the only, chain of events possible. But now, like some Greek mythical figure I can’t think of, I’m condemned to watch the inevitable sequelae for the remainder of my days.

This sounds more morose, more catastrophic, than I mean. I mean something pedestrian, banal, universal even: my parents – good, loving, flawed, narcissistic, wounded – did their best with me, and I’m condemned to work through how far from ideal their best was for the rest of my days, relying heavily on all the good they did for me as I do so.

And, as much as I’ve done my best, as I continue to do my best, I see with increasing clarity just how flawed that best is. In a way that’s true, if uniquely different, for all of us.

Melanie Klein, a psychoanalytic theorist of the previous century, described two ways of relating to the world, calling them “positions.” Her terminology was obscure, off-putting – the first position, of infants, she called the “paranoid-schizoid position.” And the second, more mature, she called the “depressive position.” I’ll radically over-simplify: when in the paranoid-schizoid position, we can’t hold mutually contradictory feelings toward a person in our mind simultaneously. People are all good or all bad, and what’s worse, when someone we previously thought good does something bad, we lose the memory and knowledge of their goodness, and only their badness is real to us. And vice versa.

When we attain the depressive position, we are freed from this brutal back-and-forth, able to understand that those we love might fail is. That they have failed us. And that, if they still live, they will fail us again.

This “position,” the apotheosis of emotional maturity, Klein depressingly calls “depressive.” It’s a lot like the 12-step slogan, “Recovery is learning that life is pedaling uphill. And learning to enjoy it.”

The reality, of course, is that if Klein was onto something, it was less absolute than she claimed. We all inhabit each position to varying degrees at different times, in different circumstances, with respect to different people.

I long ago attained Klein’s depressive position with respect to my parents. I demonstrated what that looks like a few paragraphs above, expressing both gratitude for and disappointment in them.