Almost six years ago, I wrote about my sympathy for Jeffrey Dahmer, for other monsters.

Today, as the Harvey Weinstein saga unspools, I once again sympathize with an unlikely sociopath.

His behavior is abominable. Inexcusable. Horrendous. For years, he used his power to harass and assault women with impunity. He’s a monster, and I feel horrible for all the women he violated, or threatened, or who forewent opportunities out of fear of him. I’m horrified by the number of people who made the very rational decision to be silent about what they knew about him – or even to joke about what they knew about him. It’s remarkable that I – a man with zero connections to Hollywood – knew that Harvey Weinstein had a “casting couch,” that somehow, everyone knew, but still, no one knew.

But none of that is interesting. It’s what everyone is saying.

I’ll say something different. (That’s why you read me, isn’t it? Because my take on things is a little bit skewed, off to the side?)

I feel for Harvey Weinstein. I don’t excuse him. But I feel for him. Clearly, he’s a man with a deep, irremediable lonely chasm in his heart – one with which I’m painfully familiar. Somehow, he convinced himself not just that he was entitled to “massages” or whatever it was he was seeking, but that he needed them, that the women he was pressuring to give him what he wanted had enormous power over him. Listen to the recording of his awful, painful, shameful, scary interaction with Ambra Battilana Gutierrez. Listen twice, actually. The first time, listen to her, to her fear, discomfort, anxiety. It’s brutal.

But then, listen again. Listen to him. To his monstrous use of power to pressure someone to do something she didn’t want to do, yes. But don’t stop there. Listen, too, to his pleading, his desperation, his need. I know that need. That sense that somehow he was in a life-or-death struggle in that moment, and that he was facing death.

I’ve never met Harvey Weinstein, and I could give two shits about his being fired by his brother and close friends on the board of the company he built. I don’t care about what this all will mean to his career. He probably will never make another movie (or maybe, like Roman Polanski and Woody Allen – men whose movies I’ve loathed forever, he will). But I do care about his suffering. He is a man, a human, in tremendous pain. He’s been in this pain for decades, it seems, and sadly, he’s made sociopathic use of others to escape his pain.

I’ve done that too, of course.

In my case, I harmed only those closest to me. Never those I used. Not because I’m better than Harvey Weinstein. I’m not. It’s because my endowment of traumas and coping strategies didn’t drive me to harm others in the way his did. (See what I wrote about Dahmer.)

Harvey Weinstein has millions of dollars, and tons of talent. There’s so much good he still could do, if he can learn to make peace with his demons. I sure hope he does. (And, that he doesn’t take the Bill Cosby or James Deen route.) His initial statement was both ridiculous and, somehow, admirable. On the one hand, how dare he even implicitly justify what he did with reference to when he “came of age.” Sexual assault was never good. Samuel Goldwyn was a pig, I understand, and so, it turns out, is Harvey Weinstein. On the other, if he’s sincere when he writes, “I cannot be more remorseful about the people I hurt and I plan to do right by all of them,” well, then, he may well be on the road to redemption.

When Stoya accused James Deen of having raped her, he issued a mealy-mouthed series of tweets, and I wrote what I wished he’d said, instead.

“Obviously, I’m pathetic. There’s no excuse for the ways I’ve used others to medicate my pain, and if apologizing were anything, I would do it. I do do it. I’m sorry. I’m sorry to every woman I ever harmed, either directly or indirectly, through my systematic, repeated, and inexcusable harassment, assault, and cruelty. This includes women I touched against their will, women whose assent I obtained through the use of explicit or implicit pressure, and women who simply passed on opportunities because of what they knew about me. To all those women, and to those who love them, I’m sorry. I plan to do right by all of you, individually, collectively, and societally. I plan to spend the remainder of my professional life devoted to applying my God-given talents to the challenge of sexual assault and harassment. I invite your suggestions as to how I might best do that, and I promise to keep you all posted on the work I plan to do.”

I’m sure others could write a better statement, and, of course, there are his lawyers (who might insist on his massaging some of those words a bit). But that’s what I’d have him say.

As I said, I feel for him. His world is crumbling. As it should. And yet, world-crumbling is an awful thing. If I prayed, I would pray for him.

In the absence of prayer, I simply wish him – and all those he’s harmed – happiness and safety.

And a final note: Here’s a picture of Harvey Weinstein. It’s the only one I could find in which he looks in any way sympathetic. 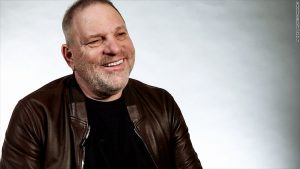