I was thinking about our waitress objectification and feeling bad about it. I’m sorry. It wasn’t very nice.

Yes. I hope she didn’t hear any of it. Live and learn. But it was a really good night all around. Hope to have another one soon! Xo

She didn’t. I was feeling bad about your experience.

Yeah, you guys are gross.

Next time we drink, whether just the two of us or some larger agglomeration, I’d actually like to talk about that. I don’t think I realized how our grossness might affect you, and I’m all confused, thinking about it.

(If you’re ok with talking about it.)

I am interested in talking about it. I’m interested ( and uncomfortable ) with why I excuse or tacitly engage with this kind of behavior when I’m with this group. I don’t do this with other friends, male or female. I think my desire to be “not uptight” or maybe different from other women , or included or something, outweighs my good judgment and discomfort. Like it’s a price I have to pay to hang out with you as a group. Which is troubling at this late stage in the game. Patterns are really hard to break.

I’m really very sorry. Clearly, and belatedly, a rethink is required. It’s a pattern we should/will break. I’m embarrassed and ashamed it took this particular moment to cause me to wonder about your experience, and that my behavior has been, is, so boorish. Obviously, there’s lots to think about, and it’s not your job to set me straight. But I welcome any help you might give. In any event, I have some thinking, and writing, to do. Thanks for tolerating my bad behavior all these years, and for being a great friend in spite of it.

They’re three of my closest friends – two men and a woman. We’ve known each other forever. Almost literally. A fourth friend was ill, and couldn’t join us. The absent friend and three of us have been friends since I was seven. The most recent to arrive, we became friends with at thirteen. We’ve all had sex. (Well, not the one who joined when we were thirteen. His sexuality, and his participation in our sexual hijinks, has been more obscure.) We went through puberty together. Through adolescence. Through post-adolescence. And all the way up ’til now.

In many ways, we relate as we did in our teens. We’re crude, sophomoric, giddy. We play with words, with conversation, and we delight, amuse, confound, and support one another. Once upon a time, we resembled a solar system, with one of us at the center. In recent years, our sun’s gravity has weakened, and we’re more like a small galaxy, five separate stars on our own paths, sometimes closer to one or another, sometimes farther apart.

On a recent evening, we sat in a restaurant, pondering the menu, celebrating some 50th birthdays. Not mine – I’m younger. The waitress – a strikingly beautiful woman with angular features and a soft cotton top through which her nipples protruded, un-missably – flirted amiably as she served us. Her beauty was breathtaking. 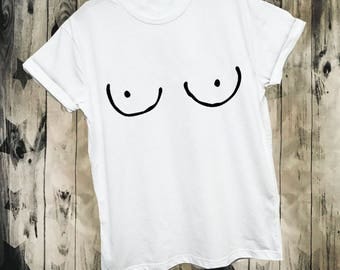 I was the first to mention her breasts. Our fourth friend had asked that, in his absence, we send him pictures of the four us us. I joked that we should send a picture of the waitress’s breasts. Our former sun and I made a few other crude comments over the course of the evening. At the end of it, our former sun sent an e-mail to the four us who had been present, and our absent fifth:

Thanks gang… lovely to see and celebrate… and only one thing was missing.

Seriously, S. Get well soon and let’s get another night out that coincides with your immune system.

You didn’t miss much. Mostly a rehash of the last 35 years. Maybe more cannibalism than usual.

[We had discussed cannibalism, and communion, among other things.]

I immediately replied, “I don’t know what you’re talking about, J. I didn’t miss her bra at all.”

Our fourth – the one with whom none of us has had sex, the one whose sexuality has been most obscure – added: “Definitely more cannibalism. Thanks for a great night. Looking forward to the next one, with S.”

D, our female friend, said nothing.

Over the course of the next day, I wondered: how was it for D to be surrounded by our puerile, adolescent objectification of this waitress? What messages did our behavior send her about how we see her? I fantasized that she enjoyed it. That she found it cute, charming, a throwback to our teens. That she liked being included, and understood the self-mocking irony of three men (really, two – though the absent one surely would have joined in) – men married to strong, accomplished women; men who are proudly feminist, progressive – acknowledging explicitly our ids, our visceral, bodily reactions to other humans.

I fantasized that. But in my gut, I knew this unlikely. And launched the text exchange with which I began.

This shit is, oddly, complicated. In my blog, I feel 100% comfortable objectifying. I do it in a particular context. It intrudes on no one. Offends no one. Affects no one who doesn’t choose to read it. But what we did, what I did, was different: we, I, subjected D to the not-so-subtly coded message that we see women first and foremost as sexual objects. That we are prepared to subject her to whatever feelings our words and behavior might engender, seemingly without even a rudimentary curiosity as to what those feelings might be.

The truth is, I don’t see women first and foremost as sexual objects. But I do, freely, comfortably, recognize the bodily sensations that arise in the presence of women. And, in certain circumstances, I feel comfortable enough to speak about those sensations. One such circumstance is with my oldest, dearest, most trusted friends. It’s liberating for me to do this, and fun.

And I should say this: not one of us ever would in any way interact with a waitress in a situation like the one I described in a manner other than respectfully flirtatious. We’re not those guys who say dumb shit. Whose eyes focus a foot too low when talking with women. Who judge a woman by her appearance, or her body.

Except…. well, you read what we did.

A lot for me to think about…. Thoughts, as always, welcome.