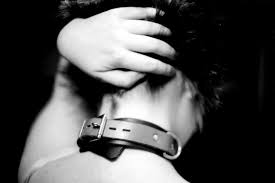 A woman wearing a collar, generally, is presumed to be communicating something fairly straightforward: I am, at least while wearing this collar, the property of another. (One day, maybe I’ll write something in which I engage full on with the challenge of such a conceptualization, at least in a country with a horrible history of slavery, but this isn’t the day. For now, let it simply be known that I think a thoughtful person can’t help but at least think through the meaning and implications of asserting ownership of another in a historical context.)

The advent and ubiquity of the more subtle black choker, more suitable for wear in public, is a wonderful thing for men like me. To me, while there’s an implicit message of submissiveness in a collar, that implicit message is trumped by the more evident message of having submitted. My associations with a collar are similar to those that many people have of a wedding ring: it says “taken,” and it does so in a transgressive, extreme way. There are settings in which a collar simply can’t be worn. They’re like tattoos, or septum piercings: certain situations are simply ruled out by their presence. Or, conversely, a collar is simply incompatible with certain situations.

Another way of saying this: because a collar asserts ownership, it’s pleasurable for the person who bestows the collar, and for the person who wears it. But if it’s not my collar you’re wearing (as V wore mine), then there’s no pleasure available to me in your wearing it.

A choker, on the other hand, has numerous superiorities over the collar.

While it might indicate ownership – as it does for this commenter – it might not. It might indicate something as simple as a fashion preference. Or anything in between. It’s a Rorschach test, not a symbol with an indisputable meaning. It’s all about ambiguity, suggestion, subtlety. Which is fucking hot.

It might mean, “I’m submissive, and I’m hunting for the right guy to whom I might give the gift of my submission.”

It might mean, “Tonight, I’m doing as someone asks me to.”

These things – and all the other possibilities – are hot. And what’s hottest, as I said, is that it’s not clear what it means. So I’m left to wonder.