Maryland Attorney General, Doug Gansler, over the summer found himself the host of a party filled with his son’s underaged friends, drinking (heavily, it appears) in celebration of their recent graduation from high school. (Gansler is the dude in the white shirt, snapping a photo with his phone!) More recently, when the picture below (on Instagram) got some attention, he found himself the center of attention as people wondered whether the top law enforcement official of Maryland might should have stopped things. I’m agnostic on this particular question. I think our drinking age laws (in the US, it’s not legal to drink until you’re 21) are stupid. An 18-year-old can marry, divorce, fight in the military, buy cigarettes, gamble, drive, but not drink. This seems just silly to me. I have no problem with individual families’ deciding what their rules are regarding drinking (and with their teenaged kids’ violating those rules, as they do all rules). My reaction to a situation like the one in the photo below would depend a lot on my sense of my son, the circumstances in which the party came about, and my understanding of the sorts of kids with whom he is friends. 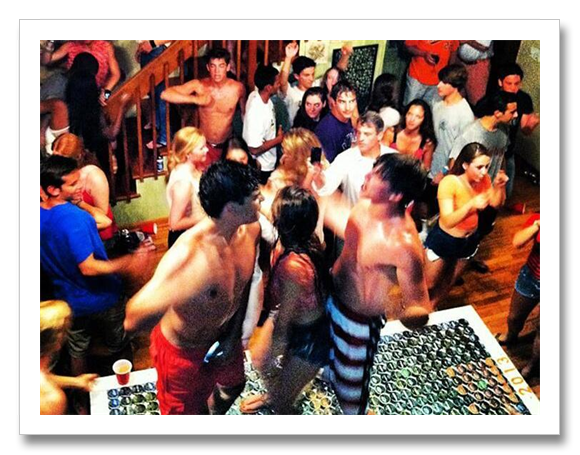 Gansler, however, has a different theory: when asked about his thoughts about stopping the party, according to the Baltimore Sun, “Gansler shrugged, and before he resumed arguing that he had no moral responsibility for other people’s children, remarked: ‘It also has to do with whether you have a boy or a girl.’” (Read the whole article here.)

Suggesting that the gender of his son was (or should be) a determining factor is horrifying.

Here are two of the many ways in which that formulation is unfortunate. First, it seems there were girls at the party. At least one of whom appears, in the photo above, to have been twerking. So whatever it is he might seek to protect his hypothetical daughter from (but not his son), he wasn’t so interested in protecting other people’s daughters from it. That’s uncool.

But what’s more uncool is the latent thinking behind his statement. Presumably, what he meant, somehow or other, was, “If I had a daughter and saw she was at risk of lowering her inhibitions, and perhaps her judgment, such that she might be more likely to end up with a penis in her mouth, vagina, or anus, whether willingly or otherwise, I would be moved to act. But hey – boys will be boys.” You know, fuck girls, rape girls.

And because boys will be boys, presumably, it’s that much more important to make sure girls’ defenses aren’t weakened, compromised. Because we rely on girls to be guardians of their previous virtue. Against blameless boys.

So much has been said and written about sexual double standards, I have nothing to add. Except this: if you’re worried about your daughter having sex (or getting raped) when drunk, but not about your son getting lucky (or raping) when drunk, then you’re a misogynist fuck. Or at least a not very thoughtful human.

And if the only child who concerns you is the one to whom you’re related, then you truly are scum.