I had planned for Véronique to receive a paper copy of the note from the bartender.* But I was running late. As I drove up the block, in the rain, toward the bar, I saw her approaching the bar herself. Did she notice me in the car as I passed her, and then stopped, double-parked, to watch her walk the remaining hundred feet? No. It was dark. The rain was distracting.

She was in her white scarf and hat, on heeled boots, in her thigh-highs and a short black-and-white striped dress. Once again, dressed unseasonably. I could almost feel my hands snaking up the tiny dress to cup her ass.

She had sent me pictures of herself less than an hour earlier as she dressed for me. My cock was hard from an insane day’s worth of anticipation. As she walked, I looked again at the pictures she had sent – her topless, in her lace white panties; her, topless in her lace panties, rolling up her thigh highs; two, of her in her thigh-highs and panties, one standing up straight, the other, just slightly bent forward, accentuating the curve of her already round ass; one, with the black and white dress on, just being pulled those last few inches down to cover her ass; and one, being lifted to reveal the white panties covering her pussy.

I texted her that she should check my blog, that instructions awaited her there (here).

I busied myself with parking the car outside the bar, situating myself nearby, testing the Zipcar remote lock/unlock app, and waiting.

She called. I didn’t answer. It appeared she didn’t leave a message.

“You didn’t leave a message?” I texted her.

“I did,” she said. And the message came through. I listened: “COME FUCK ME NOW!” That was it. Well, I had to admit, it did have a certain hotness to it. But I had promised her I wouldn’t fuck her in a bar’s bathroom. She had suggested that was beyond the limits of her comfort. So I texted back, “No. I promised you I wouldn’t.”

I asked, by text, about the ice.

She said it was good.

She called a second time. “Come out to the car,” I said.

“But you have a scotch waiting?” she said.

There were some hijinks as she struggled to find the car. It wasn’t hard to find. My directions were good. But she was a little, um, frazzled.

As she approached the car, I unlocked the doors. She climbed into the passenger seat and noticed that I wasn’t there. I could see the look on her face. I think it could best be translated as, “Oh, FUCK!” With a wry smile.

I texted her: “The car is empty. The door is open. You’re safe. I’m watching. Sit back. Touch yourself.”

She tilted her head back, laughing, and slid her hands between her legs.

I opened her door. She started. I bent down and kissed her, hard, as I shoved two fingers past her wet white lace panties, pulled to the side, and into her sopping wet pussy. I said, “Nice to see you!” curling my fingers up against the roof of her cunt. I took my fingers out, shut the door, and walked around to the driver’s side as I licked her juices off my fingers. 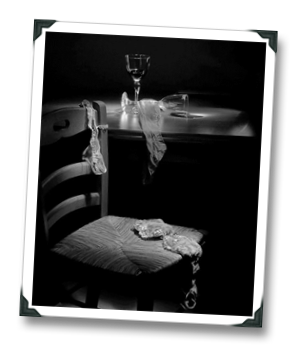 * Incidentally, the note wasn’t my idea. A distant buddy, about whom I hope to tell you and perhaps show you more at a later point, suggested it. For which I (and I suspect V) are enormously grateful.