Emily tries my patience. At a distance, she’s hardly submissive to my requests, compliant with my demands. Except when she wants to be, when she is. Worse, she dispenses with requests she doesn’t like or isn’t willing to comply with dismissively, disrespectfully. “Can’t right now,” she often says in response to a request.

I tolerate her misbehavior, though, because a) she’s terribly sexy, and b) every so often, she comes through. Last week, with her response to my assignment. And this week, with this picture of her remarkable ass. 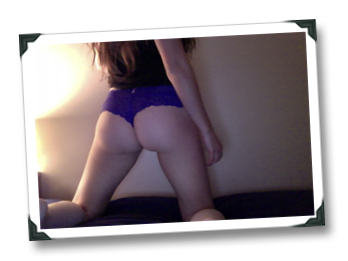 A woman recently asked me to describe her. “You’re so good at describing women,” she said. This isn’t, I should say, what I think my strong suit. I think I’m good at describing my responses to women. But the women themselves? I don’t think that’s where I excel, paeans notwithstanding.

Anyway – you can see Emily’s ass for yourself. I won’t waste words describing it for you. But I will tell you its effect on me:

I’m hungry for it. It makes me want to reach through the screen of the laptop, grab her hips, and pull them back to me, so I can grind those blue panties – and the flesh they struggle to contain – against the stiff bulge in my fading jeans.

It makes me want to grab a fistful of it with each hand, just to squeeze.

It makes me want to slide my hand up along that right thigh, thumb facing down, so I can squeeze as I go, to press the outside edge of my pinky finger up against, into the fabric, to feel the heat of her pussy, to feel its moisture. And then, to draw the hand back to my face, to inhale, to feel the scent of her cunt waft into me.

It makes me want to slap, to spank it. Not so much for the tactile sensation of my hand on the flesh (though that would be nice), but for the visual experience of seeing her pale flesh react to the impulse, both in motion and in reddening.

I suppose there’s more, but she’ll have to send more, to authorize me to share more, for you to hear.