Luna is difficult. She’s spoiled. She’s entitled. She’s an attention whore. Not infrequently, she e-mails me, “Give me attention!”

That first part – the part where I express a preference – doesn’t really work for me. I don’t often think in those terms. I mean, a month ago, I wrote about the Amazon and her phenomenal mouth, but that was, she was, truly, exceptional.

As I’ve written, and said, often, when I’m having good sex, it always feels like the best sex I’ve ever had. So Luna’s desire to hear me denigrate others in favor of her, even if only implicitly, by expressing a preference for her, is kind of a non-starter. And worse, it’s affirmatively a turn-off. We reached a détente on this somewhere along the line by my reassuring her that she is my first call. Somehow, she also heard (though I studiously didn’t say) that she is “the hottest person [I] hook up with.” I avoid comparison. She craves it.

In addition to being difficult, Luna is spectacular. She is extraordinarily pretty – with luscious, pouty lips, high cheekbones, and a long slender face; her body is astonishing, with sharp curves; her compliance, at least in the bedroom, is nearly perfect. She is, in the words of an old friend of mine, “fun to fuck.” She is my first booty call when I have a night free. I enjoy telling her how much I want to fuck her, how much I want her to suck my cock, how much I like licking her pussy. I do want those things; that she wants to hear them is a happy coincidence.

Fast forward to the moment when I opened the door. I found her, as instructed, lying face-down on the bed, the restraints ready, her arms and legs spread. She was wearing a pink spaghetti-strap dress I’d chosen (among four choices), though honestly, it seemed more like a nightgown than a dress. As I opened the door and looked down at her, I marveled at my good fortune. This magnificent ass, writhing in anticipation, that had partially inspired the name “Luna” (the other half of my inspiration was her insanity) was mine for the evening, to do with as I pleased. I could rain down blows on it. I could bite it. Kiss it. Lick it. Stick a thumb in it. Fuck it, I suppose, if I so chose (though I’m not a big fan of anal sex, and I had ascertained that Luna isn’t either).

So there she lay. The lighting was wrong. I did my best to fix that. I strapped her down to the bed, tightening the velcro cuffs around her wrists and ankles. I moved the Magic Wand’s plug to the other side of the bed, where there was a slightly closer outlet. I tied a pillowcase around her eyes, blindfolding her, more or less effectively.

And I went to work.

Luna hadn’t come in some time – days? Maybe a week? She was desperate. I felt her pussy – it was warm, moist, through her black panties. I turned on the Magic Wand and explored her legs with it. Her thighs. Her knees. And then, her cunt. I pressed it up against her cunt, hard. She let out a soft moan. Then a not-so-soft moan. We had agreed on a “safe word” to be uttered not once, but three times. I got it once, but no more. I pressed the wand harder. She bucked some more. I stopped.

I unshackled her, flipped her over, reshackled her. Pressed the wand against her again. Turned up the speed to the higher setting. Did she say the word again? I don’t remember. I stopped, undid her ankles, removed her panties, refastened her ankles. 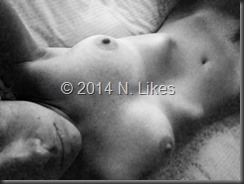 I fucked her face just a bit. My cock was insanely hard as I continued to wand her, as I put the wand to the side and pressed my mouth into her cunt. But when I thought, even briefly, about actually fucking her – I put on a condom and lifted myself up – the erection softened just enough to be useless for this purpose. Why? I don’t know. I never, ever lose my hard-on when my dick is getting sucked. But when fucking? It doesn’t matter who, doesn’t much matter how, it’s a fair bet that, from time to time, it just won’t work. I’ve written before about how fucking isn’t so much my thing, how I really really prefer oral, how if/when my cock does soften, it’s an indicator of nothing so much as my desire for my partner to suck my cock. But it sucks when it happens. I want to fuck Luna well, to fuck her hard, to make her come by fucking her, and, at least at this moment, it wasn’t happening.

I dove back down, lapping at her clit, pressing my tongue against it, shoving fingers into her, gently inserting one into her ass. She was writhing more now. Was she nearing an orgasm? I didn’t know. I don’t know.

At some point, two condoms in, we took a break. I undid her. She went to the bathroom. We drank some water. We collaborated to put on her corset. Yes, she had a corset – somehow, in a previous relationship, someone had had a corset made for her, but hadn’t stuck around long enough/been kept by her long enough to see her in it, to fuck her in it. So we put on her corset, an elaborate, complicated affair that included discovering we had put it on upside down at one point. Once in it? She looked exquisite. I wish I could share one of the pictures I took of her in it, but they weren’t among the ones she approved for inclusion in this post. (No surprise there – they all featured her face.)

Incidentally, I never get this. I mean, I am trustworthy. I’ll never show those pictures to anyone who doesn’t have the login to my e-mail, and there’s only one person who does. But still – how is it that Luna, that anyone, can trust me enough to permit this? I have some majorly incriminating – and majorly hot – video of Luna sucking my cock in a mirror, and up close, her face clearly identifiable to anyone who knows her. I am trustworthy. My data is secure. I take lots of precautions. But this strikes me as… unwise. (I won’t even send a face pic to anyone from an N. address.) [On reading this post in draft, Luna points out that she and I have a written agreement on this subject, one that, perhaps, with her permission, I’ll share with you.]

Anyway… I told her that she was to restrain me now. She seemed to like this idea. She cinched the restraints tight. She lay a towel on my head (this was a lazy moment – it was easier than fashioning a real blindfold). She sucked my cock. She pressed the magic wand against my legs, against my cock, against my balls (OW!). She sucked some more. She put a condom on me, and rode me.

And THIS, by the way, is my favorite way to fuck. I know I’m dominant and all, and it seems every woman I ever meet wants to be fucked doggy-style, hard, but for me, the best form of fucking is the laziest. Let me just lie there and ride me. I’m good.

That’s what Luna did. I was restrained, I couldn’t move. I could arch and buck a little, sure, but my range of motion was limited. I couldn’t even reach her clit with my thumb.

No matter. She rode me, hard. I don’t remember if she used the magic wand while she rode me, or if she touched herself with her fingers, or what. But at some point she said, “Will you come with me?” I told her I would. And then she came. Moments after she came, she expelled me and I came, powerfully, into the condom now outside of her pussy. FUCK that felt good.