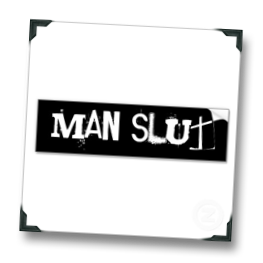 Slut: a person who sleeps with more people than I do.

Slut: a person who sleeps with my friends, but not with me.

Slut: a person who sleeps with more people than most.

Up above, on the banner of this site, I proclaim myself “Husband, father, slut….” But am I a slut? Jefferson (he used to blog, but now just collects ad revenues and promotes himself, it seems) proclaims himself “the easiest lay in New York.” I’m not that, for sure (though I often wish I were). In recent weeks, as I’ve been on a few dates that haven’t led that far – or that I’ve not wanted to lead that far – I’ve found myself pondering just what I mean when I call myself a slut. Part of it, surely, is aspirational: like just about everyone I know, I’d like to have more sex than I do, with more people than I do. Part of it is accurate, descriptive, at least relative to societal norms: I’m a married guy who’s had sex with more women than I honestly can count (without significant effort) in recent years.

But part of it is just not right, at least, not today: I’ve had sex (penis-in-vagina sex) with two women other than my wife in 2012, and both of those were in the early weeks of January. I’ve had oral sex with one or two other women this year. I’ve been on a bunch of dates (3? 5?), but they’ve not amounted to anything. In two cases, this has been somewhere between a mutual decision and the woman’s preference. I haven’t picked up a single woman (in 2012 or in any year, best I can remember). The previous calendar year featured a bit more sex – I had an active relationship with L for the last quarter of the year, and I went to a not-insignificant number of “play parties” and sex clubs in 2011.

Part of how my “sluttiness” works is that I seem to strive to collect desire – I want to be wanted, even if I don’t want to fuck. So if I go on a date with a woman, and I’m not particularly attracted or interested, I still hope to be desired. Not because I want to hurt her, or reject her. Just because I want to know that she has found me desirable. Of course, once that happens? If I’m interested, Yahtzee! But if I’m not interested, that’s a problem, because I’m a mensch, and don’t particularly want to reject or hurt anyone. But in that circumstance? That’s what I do. Say, politely, thanks but no thanks.

This year, in at least as many instances, I’ve simply not been interested. Not necessarily not interested in the person, but not interested in fucking the person. Where Jefferson is an easy lay, I’m a tough one. I really only fuck the full package: a smart, funny, hot, woman who excites me both intellectually and sexually. And, like all of us, I suppose, I’m a bit of a victim to my own desires, and have a bit in common with Groucho Marx. If I had a nickel for every woman I wished I were attracted to, I’d have a lot of nickels. More often than not, I find myself not attracted to the women most attracted to me (and attracted to those who find me less exciting).

There are these guys who pride themselves on “being able to” fuck just about anyone, whose dicks are so hard that, essentially, if a woman has a vagina (or, in the case of a true bisexual like Jefferson, if a person has a heartbeat), they can, and will, fuck that person, given the opportunity. They populate swingers’ events in spades.

This just isn’t me.

I can kiss just about anyone (and really like kissing most people, male or female), but the idea of putting my cock in just anyone’s mouth, in anyone’s cunt? It doesn’t so much work that way for me.

As I was pondering this question, and talking it over with a friend, the other day, she suggested that I should take “slut” down from the banner up above. She suggested that it’s really not fair of me, that women reading this blog and going out with me might expect me to be game to fuck them no matter what. But this seems wrong/unfair to me. I am a slut (he insists, plaintively).

This is more apparent in my “distant buddy” relationships, virtual relationships with women primarily far away. Here, too, I have standards: there are women with whom I “click” easily and early (there have been three of these, two of whom remain active), and women with whom I don’t. Because I’m who I am, I tend to give those in this latter group a genuine college try before admitting defeat (I like being desired, remember). But I am more of a slut here: I do from time to time have multiple “affairs” going on, and I am a bit more… profligate.

So I won’t be striking the word from the banner. But I’ll be a bit less vociferous in my self-proclamations of slut-hood.