By now you’ve gleaned that things with Tamora went sideways. Yesterday’s post reflected where I had hoped they were headed. The post of the day before gave you a bit of a taste as to where they ended up, instead. Basically, without belaboring all the painful details….

Tamora was offended by what I wrote in yesterday’s post about her use of the word “domineering.” She feels some intellectual/academic insecurity, and what I wrote tread all over that insensitively, in a way that left her feeling belittled, demeaned, and just shitty.

I’ve reread what I wrote a dozen times since things went sideways between us, and I don’t know what to do about it. (I mean, I do know: there’s nothing to do. Tamora’s wounded, in a way she experiences as familiar with me, and there’s likely no recovery for me.) For a while, in our exchanges, I tried to apologize in ways that reflected an appreciation for her experience. Whatever I said landed wrong, though. She felt I was blaming her, that I was continuing to offend.

I don’t want to reproduce our exchanges, both because they were private and I don’t have her permission (and don’t particularly relish asking, at this moment) and because – well, because I’m not litigating here. The bottom line is, as I have now written a number of times, this isn’t a question of right and wrong; I managed to offend her, to hurt her. And that’s really the beginning and the end of the story. Doesn’t matter if I have a good defense. Doesn’t matter what my intentions were. I failed. Manifestly.

Nonetheless, I feel I have to say it: I wasn’t mocking her. What I wrote about the word “domineering” wasn’t intended to call attention to anyone’s lack of knowledge other than my own. And all of my apologies were genuine, even if, apparently, they were shockingly ill-calibrated. All I know is, shit went sideways, it’s my fault, and now, I don’t think I’ll ever get to feel her incredibly soft, incredibly moist mouth on my cock, or to feel her thighs grip my ears as she rolls past orgasm after orgasm. 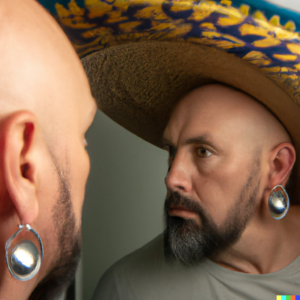