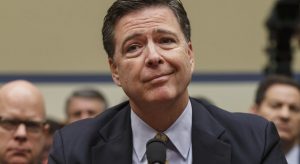 You know that word?

It’s Yiddish. It’s sort of like “cojones,” but without the implication of strength or fortitude, and instead, with a hint of criticism – both of judgment and, likely, of character.

Here’s an example: let’s say that you run a government agency charged with investigating crime. And let’s say that, after an extended investigation, you conclude that no crime has been committed, that “no reasonable prosecutor” would prosecute. If, after having reached that conclusion, you then hold a press conference in which you follow that conclusion with some personal judgments – not legal judgments, mind you, but personal judgments – about the person the investigation of which you had just closed – if you do all that? That’s chutzpah. It would be chutzpah if you did it with respect to any individual. If you do it with respect to one of the two major parties’ candidates for the presidency in the United States? It’s really chutzpadik. (That’s the adjectival form.)

Now. Let’s say that some time passes. Let’s say that, ten days before a national election, you learn of a trove of information that you have no reason to believe would have any impact on your previous conclusions. If, having learned of said trove, you conclude that it’s more important that you protect (some notion of) your reputation, that you tell the truth at all costs, than that you uphold a generations-old policy and tradition of not involving your agency in electoral politics? That, then, is supremely chutzpadik.

Then…. Say that, having made those previous chutzpadik moves, you conclude that, in fact, the trove of information described in the previous paragraph turns out to hold nothing in it of note. If you then issue a cryptic note that simply references your previous conclusions – which conclusions, you will remember, included both the decision not to prosecute and the condemning judgment?

If you do all that, I would say you are terminally chutzpadik.

I know there are political exigencies that I can’t appreciate, but I’m hopeful that, whoever wins the election on Tuesday, the current head of the FBI will soon be the former head of the FBI. I suspect the exigencies will win out, that his chutzpah won’t be punished. But damn. It should be.