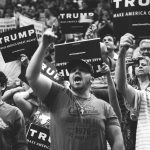 I don’t often write about politics.

If you read me regularly, chances are, you’re not here to know what I think of Hillary Clinton or Donald Trump, and, generally speaking, I don’t tell you. Although occasionally I make exceptions to this policy.

I also learned the platform committee defeated efforts to mention homosexuality in any context that isn’t negative, that isn’t disapproving. This paragraph from the Times article on the platform chilled me (and not just because of the gratuitously split infinitive in the first sentence):

An amendment to specifically recognize that gay people are targets of the Islamic State caused a stir among more conservative delegates who said they felt there was no need to single out any one group. As the delegate who offered the amendment, Giovanni Cicione of Rhode Island, argued his case — by saying he believed it was an “innocuous and important” way to tell gay people the Republican Party does not exclude them — another delegate moved to shut off the debate.

I know it’s not news, really, that the GOP is desperately resisting the changes wrought by the 21st century. But it’s disheartening to see that they can’t find a more inclusive way of appealing to the people who genuinely feel threatened by modernity.