First – and to be fair, she noticed this after sending me her revised version of our first meeting – she omitted the whole part where I blindfolded her, tied her hands behind her back, with pillowcases.

Second – and this I can only attribute to generosity – she left out the parts where we fucked. We did, you know. I fucked her from behind, (very) briefly. And she rode me (as you may recall, far and away my favorite position), less briefly. But both fuckings came to abrupt ends with my not-huge cock sliding out of her, and being less hard than a cock should be for fucking by the time it found its way back to her pussy. So thanks, Véronique, for sparing me that account in your words, but because I’m just that kinda guy, it doesn’t escape my chronicling.

Third – and this may be either oversight, mortification, or somewhere in between – it’s worth noting that my thumb apparently was the first to gain entry to Véronique’s delicious, yummy asshole. I pressed against it, into it, repeatedly, to (seemingly) great effect. I don’t believe she left it out of her description because it wasn’t good for her. She told me afterwards that a) this had been a first for her, and b) she had liked it.

As for the rest? It’s all differences of style, perspective, emphasis, or experience. Enjoy. And please don’t take my word for any of this – read her account too.

So the tale left off with my slamming V’s bourbon and leading her to the car. As we walked out – I led – I was aware that her ass was behind me, not in front of me, where it belonged (notwithstanding any pegging fantasies I may or may not have). I led her out, across the street, to the car where I had watched her (not) arrive. I realized – chivalrous guy that I am – that I had mis-played the Zipcar chivalry app. See, the thing is, the way Zipcars work, you use a card to unlock the car, and the transponder is on the windshield, on the driver’s side. Never again. There’s also an app on my Android, with which (I’m almost certain) I could unlock the doors.

See, I was raised in an era of car KEYS, and if you’re a dude, planning to fuck a woman, you open her fucking door for her. Zipcar screwed that up, and I mishandled it.

So anyway, she walked to her side, I to mine, and I waved the card over the transponder, unlocking the car. We climbed in. I pulled her head toward me, and we kissed for a moment. But only a moment. “Play with yourself,” I said.

“I think you should,” I said. I had had two scotches and a small gulp of bourbon. I’m a heavyweight drinker – wasn’t feeling even slightly affected – but yes, seatbelts are good, and driving is risky, whether I’ve had anything to drink or not. (Note: V seemed to believe that Johnnie Walker black, on the rocks, is my “regular.” She’s not wrong, exactly. But, for the record, it’s what I drink in bars. In restaurants, at home? I drink better stuff – Oban (scotch for “pussies,” I’ve been told), Macallan, Bruichladdich, etc.)

Anyway, after strapping herself in she spread her legs (“Spread your legs wider,” I suggested), she began to touch herself. I busied myself with the task of locating a suitable hotel. For about ten seconds. When I realized that the prospect of either calling or web-surfing while she was touching herself next to me was INSANE. We’d go to the Liberty Inn. It wasn’t that close, but we’d be there in fifteen or twenty minutes.

For thirty minutes, we drove. She touched herself, we talked, I drove. At red lights, I would finger her, we would kiss. She was (occasionally) self-conscious about pedestrians, about other cars. I was careful – I’m not exhibitionistic in this particular way. At one point, I recall, there was a truck at a red light: I didn’t pull all the way up. I wanted this (spectacular, unimaginably hot) view for myself. I’m not generous in that way.

There was traffic. It was slow. Fuck. Will we ever get there?

We kissed, on the street, under the High Line.

We walked, two minutes – less – to the hotel. There was a hot, Latino guy ahead of us on the line. “Have you ever been here?” I asked V. “NO!” she answered.

“Who are you with?” asked the guy at the desk.

“My woman’s in the car,” said the Latino guy.

“I have to fucking get her?”

And then I was at the window. “How long?” asked the guy.

“Right now, we’re not renting for less than three.”

“Ok,” I said, not particularly displeased with that answer. I had thought two was the right answer, but I was happier with three. The guy before me returned, with his (not particularly attractive) date.

As we walked up the stairs, I overheard the guy who had been ahead of us asking, “So you wouldn’t have let us in if I was with a dude?”

[I don’t think that’s the case – I think their policy is that everyone checking in needs to check in at the same time.]

Anyway – to the room we went, up the stairs, through the cloud of pot smoke in the hall. Did I comment on it? Did V? I’m not sure. But it was strong.

And once inside, I pressed her up against the door. I remembered that she liked being pressed up against walls. I might have fingered her. I definitely kissed her, hard.

“Take off your dress,” I said.

I kneeled in front of her and dove into her pussy. Fuck teasing, fuck anticipation. How long had it (already) been? I just wanted to taste her, to taste the taste I’d been smelling on her fingers, on my fingers, for an hour or more.

I pinned her legs over her head, pressing her thighs down, and I licked, hard. I wasn’t gentle, wasn’t soft. I was hungry. Did it feel good to her? Was this how she liked it? Honestly, I didn’t care. I wanted to taste her, to press her clit, to feel my tongue sink into her, to feel my fingers in her. Her experience was far from my mind. Not that I was indifferent, exactly – what I wanted was to give her my ardor. And she got it.

The next two hours are a blur. I could lay it all out for you (and she did, better than I could, with some notable exceptions, described above). But I won’t. Real life calls, and honestly, is it the details of what she did with her tongue, what I did with mine, that you want to hear?

Suffice it to say, it went roughly like this:

Blindfolding. Restraining. (Me, at my request.)

She came down to the bed, and we resumed.

We peed, we dressed. We talked about the room, about the hotel, about life.

We emerged onto the street, walked to the car.

You’ll have to wait. 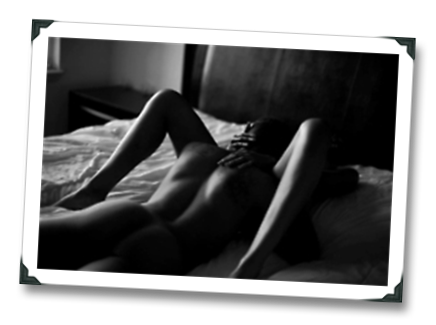