In that way we sometimes do, we sometimes have to, just given the realities of life, we had prenegotiated what our sex would look like that night. “I want you to go down on me when we get home,” T said as we headed out to the family affair.

Seven hours or so later, two long-ish drives, family tsuris up the wazoo, and neither of us was feeling especially sexy.

“I want it in the morning,” she said, even as her eyes were shutting.

“And you shall have it in the morning,” I said, picking up my book, and stroking my cock.

When the morning came, we both did minor ablutions – toothbrushing, primarily – and returned to bed. I locked the door.

“Would you wand me a bit?” she asked

She reached over and opened our under-bed drawer to pull out the wand. 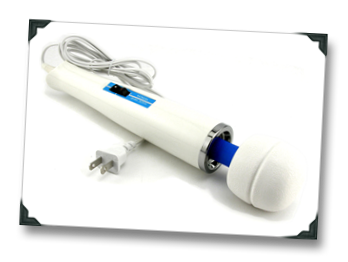 I love the wand.

But its cord is too short.

So she plugged it into the extension cord, and scooted over to the left-most portion of the bed. I scooted toward her, and grabbed the wand. She spread her gorgeous legs as I pressed the humming machine into her, against her shorts. She arched her back, pressing up to meet it. (A husband never should express a view about a favorite part of his wife’s body – he runs the danger of being the son in the joke about the Jewish mother who got him two ties for Chanukah – he puts one on and she says, disappointed, “What, you didn’t like the other one?” But T’s legs are, um, unbeatable.)

“Mmmmm,” she said, matching the hum of the wand.

I pressed hard into her, taking advantage of the size of the bulb on the wand. It’s not clit-sized, at all. It’s more, like, almost, crotch-sized. It just naturally fills the space between her legs.

It can press against her clit, and reach down the full length of T’s lips, and reach all the way down to her taint. And with just a nudge down, half an inch below the clit, the other end is pressing against her asshole.

And so I did. I pulled off her shorts and her little cotton black boyshorts (that I bought her for last Christmas, as I recall). I spread her legs a bit wider, and I lowered my mouth to her delicious, musky cunt. I pressed my tongue against her clit as I tickled her lips with my fingers. I licked, gently, up and down. I pressed, hard, against the clit. I slid a finger or two into her pussy. I pressed down on her abdomen with my other palm, hard. Her moans were growing louder, and I was growing more self-conscious. Our house isn’t constructed for privacy. From our kid or our neighbors.

I felt the contractions start inside of her – she was getting ready to expel my fingers, to push them out, as she came. I slowed down a bit. My fingers came out, and I stroked her ass gently. I stopped pressing so hard with my tongue and I let her slow down a bit.

A delicious way to start the day.