Once again, T and I found ourselves sitting across from S and the Dude, once again in a bar with pretentious bartenders and ridiculously named drinks.  This bar has character, though – no sign outside, other than the ancient neon “BAR” sign that gives no indication of the ornate wooden interior, the chalkboards listing wines and drinks and beers and prices, the high-backed deep booths that provide privacy for every party.  The music was eclectic – Vince Guaraldi playing the Peanuts theme song, Elvis (the first one) singing “Blue Christmas.”  T had some sort of drink involving vodka and blackberry (a “Bramble,” I believe); S had a “Cat’s Meow.”  The Dude drank beer.  I drank cider.

T was dressed to kill – a skin-tight black dress with pink baubles she had bought to wear to a Chemistry party, black stockings, the Agent Provocateur lingerie I gave her two nights ago, black pumps.  She was eminently, infinitely, fuckable.  S looked hot too, in tight black slacks and a black satin top that draped over her breasts delightfully.

Unfortunately, tonight was not to be.  The mucous level in my skull was high to begin with, and by the time we were on our second drinks, my “m”s sounded like “b”s, my “n”s like “d”s.  S asked, “So what are you guys thinking?” 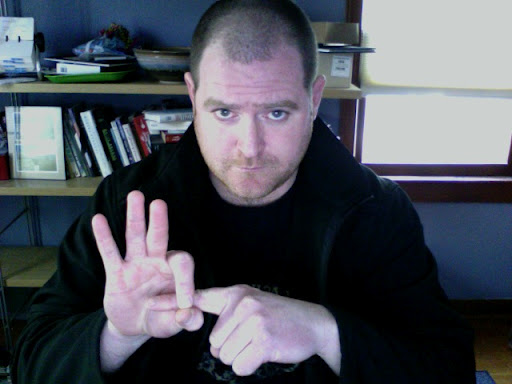 I sneezed, blew my nose in my napkin, and said, “I have two thoughts.”  I hesitated, and the Dude asked if it would be easier if I wrote my answer down.  “No,” I said, “but charades might be fun.”  I pictured myself poking one index finger through a circle formed by my other thumb and index finger, and interrupting myself to blow my nose and sneeze.

“First,” I began, “and I think I can comfortably say that I imagine I speak for T when I say this, we REALLY want to fuck you guys.”

And I continued, “But second, I think we want to do that on a night that isn’t tonight.”

S was inscrutable, but the Dude was visibly crestfallen.

I looked at S and said, “The thing is, if I imagine kissing you, or going down on you, I fear I’d suffocate, as I can’t breathe through my nose.”

We hurriedly planned a date (for next Friday, so stay tuned) and bid our farewells.  T and I drove home, and I’m now about to go use a Neti pot before crashing.