I left V in the dark about our plans. I planned to push against her limits, to take her further than she had been, previously, while at the same time, respecting those limits, not making her too uncomfortable.

We met at a dark, sultry bar. Jazz was playing. She was in leggings, as I had asked. When I walked in, she was sitting there with work in front of her, reading by candlelight (an ability of which I’m increasingly envious). We went through some preliminary limit-testing and teasing: would she kneel in front of me in the bar? No. So I knocked her pencil on the floor and asked her to pick it up. Would she go to the bathroom and come back with her fingers smelling of her pussy? Yes. Sitting across from her, I spread her knees with mine, wider than was comfortable. Wider than was appropriate.

“We have an audience,” she said.

I explained to her my plans: “We’re going to Le Trapeze,” I said. I reassured her: I wouldn’t ask her to touch, or be touched by, anyone else, nor would I touch, or be touched by, anyone else. I wouldn’t ask her to engage in any sexual activity in public. And I promised her she would be safe, no matter what. I described the place for her, as I have here. She had read all of what I’ve written here, but I think hearing it in conversation helped make it real, helped make it feel safe.

We finished our drinks, and went on a mission to get condoms (I had forgotten them, in my rush to get out of the house). I had her buy them, but I lingered with her at the counter. I liked the clerk looking at us, knowing we were about to go have sex. I always like that feeling when buying condoms now – for so long, I felt ashamed of what condom-accompanied sex I had. No longer, and now, I get to indulge my exhibitionism.

So we got the condoms, and walked to Le Trapeze. She was nervous. And her nervousness gets me hard. Partly, I think, because she arrives at her nervousness from a place of confidence and security: it’s not that she’s scared, exactly – I can feel that she feels safe. No, it’s that she’s resolved to confront her nervousness and to barrel through it with me, for me. That’s fucking hot.

So in we went, giving our names (“Nick and Veronica,” I said to the man at the door. But then I detected his French accent, and gave her “real” name instead). In we went….

We stood up and started to walk toward one of the “private rooms” along the hallway that leads from the front to the back of the club. Just as we started to step inside, one of the members of the staff stopped us: “No shoes in the room, please.”

Shit. Would we have to be nude? I had been in the rooms dressed before, once, with Jen and Mara. And tonight, much of my fantasy involved getting V’s leggings soaked through with her juices.

We went back to the locker room and lost our shoes (and her bag, and our coats). And we headed back to the little room. Sitting on the couch, in the same position they had been when I went in the same room with Jen and Mara, were the Venezuelan guy and his girlfriend/wife/partner, the hot chick with perfect breasts and glasses. “Hi,” I said to them. They didn’t look like they were in a good mood. “See you later….”

I locked the door – I really didn’t want company. I positioned V against the wall, standing on the wall-to-wall mattresses. “Lift your hands above your head.” 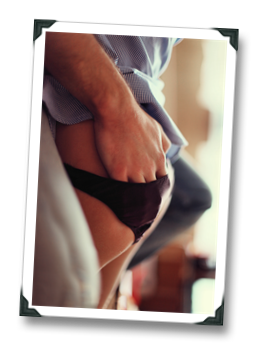 I kissed her, hard, as I pressed my palm against her cunt, through her leggings and panties. She was warm, but not yet wet. Or at least, not yet soaked-through wet…. I pressed her leggings into her, with one, two fingers. I kissed her hard. Squeezed her ass. Pinched her nipples, twisted them, rubbed them. Her leggings grew first moist, then damp, then, fully, wet. I pulled them from her, and invited her to crawl across the (very small) room to my cock, as I sat on the floor and spread my legs.

She teased me through my jeans for just a minute, and seemed, um, eager, to get to the cock itself. I pushed her back, onto her back, against the far wall. I stripped off her panties and dove between her legs.

The next hour or so is a blur, as I didn’t remove my mouth from her pussy. V was twitching, twisting, turning, squeezing, pushing. She knows that there’s a magic word that will make me stop. (It’s “stop,” should you be wondering.) And I was acutely aware that I hadn’t yet heard that word. The orgasms came fast and furious. One, two, three. Four, five, six. Somewhere in there I lost count. My ears were ringing as her thighs squeezed my head tightly. My tongue grew sore from darting in and out, from pressing on her clit, from stretching down to her asshole. My fingers cramped as I fucked her hard with first one, then two, then three, then four fingers. I was aching, hurting, from the pleasure I was giving. It was fucking hot.

At some point, she did say “Stop.” And I stopped. She tells me it was after twelve orgasms. I’m not sure how she kept count; I sure couldn’t. But we stopped. We walked around the club. I showed her the big party room. We walked upstairs. Everywhere we went, the men – and the women – leered. I was pleased, proud, and just a little skeeved out at how, um, interested, people seemed in V.

I had promised her I wouldn’t expose her to too much attention – wouldn’t have her perform in public, wouldn’t put her in peril of being approached by other people. (Not this time.) So we withdrew once more to the little private room in which we had just spent so much time.

We hadn’t fucked yet, and I was looking forward to that. I wanted to take a walk around one more time, and was even contemplating fucking her in a somewhat more public part of the club, when the damn “Closing Time” song came on. Shit.

V mused at the experience of having read about that moment once before, and now experiencing it first-hand.

We walked back to the locker room, which was so crowded we had to wait to be admitted. When we walked in, a rude white guy presumptuously asked V (not having so much as greeted her), “Are you Russian?”

I think if I’d had one more drink in me I might have intervened, might have asked him just what the fuck he was asking. I’m glad I didn’t.  But I was annoyed.

We changed into our clothes, walked out to the street and hailed separate cabs home.