I promise to try not to let this blog become a journal of my experience of life under Trump, but today, on this beautiful Fall day, the news has left me feeling worse, less optimistic, about the next four (or eight, or, per Steve Bannon, fifty) years than I’ve felt since the election.

I feel a dull, ominous ache in the pit of my stomach, as I take in the following:

Last night, Mike Pence, the VP-elect, was greeted by a mix of cheers and boos last night when he arrived at a performance of Hamilton, the musical. 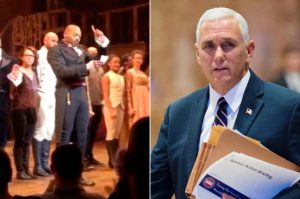 At the end of the musical, one of the cast members read a short speech – one that, to my mind, was unobjectionable. Today, the President-elect tweeted twice, once complaining that the cast had been “rude,” and should “apologize,” and once, characterizing his treatment as “harassment” and saying, ominously, “This should not happen!”

Our wonderful future V.P. Mike Pence was harassed last night at the theater by the cast of Hamilton, cameras blazing.This should not happen!

The Theater must always be a safe and special place.The cast of Hamilton was very rude last night to a very good man, Mike Pence. Apologize!

Now – just a word on what VP-elect Pence experienced last night. As he entered the theater, there was a mix of cheering and boos. And as he left, an actor read a two-minute-long speech, as the audience cheered him on. I watched the video, and encourage you to. It looks like the VP-e was safe, and like the evening was, indeed, special, for those who attended it.

But the President-elect – and the right-wing media cheering him on – seem to be fixated on the “disrespect” shown VP-elect Pence, and to be utterly horrified.

Here’s another thing that happened yesterday in New York:

Swastikas were drawn on a playground, above the slogan “Go Trump.” 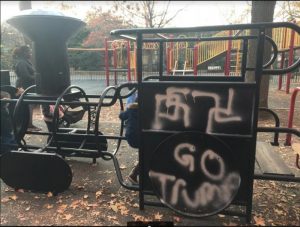 I am trying to figure out what I think of the fact that our President-elect is more troubled by what he perceives as disrespect – disrespect in the form of truly respectful, constitutionally protected speech – than he is by criminal and hateful vandalism.

President-elect Trump thinks the cast of Hamilton – and, presumably, the audience, some of whom booed our “wonderful future VP” – should apologize.

Here’s what I think should happen.

The president-elect should not seek to intimidate artists engaging in constitutionally protected free speech.

The president-elect should not encourage, through silence, hateful vandalism and threats.

The media shouldn’t seek to whip up a frenzy of hatred toward those who disrespect our leader. (God knows, the Republicans had no problem with shows of disrespect to President Obama.)

The president-elect’s chief strategist should not threaten/promise a permanent Trump presidency. (“… we’ll govern for fifty years!”)

The president-elect’s chief strategist should not make Nazi dog whistles. (“It will be as exciting as the 1930s….”)

In general, I’ve been pretty sanguine about what a Trump presidency might hold. That’s not to say I don’t fear that he will do horrific harm – I do. But I have a lot of confidence in the strength and resilience of my country, and I don’t worry – or haven’t worried – that Trump would do it, or the world, truly horrific and lasting damage.

It’s only ten days since the election, and I’m starting to worry.